“When It Snows, Bowie Goes”

It’s long gone now… its grandstands demolished, its tracks torn up. A covered horse bridge where racehorses made their way from the stables to the track is the only visible remnant of the once-famous Bowie Race Track.

But the stories remain. Penguins parading through the grandstands, plane crashes, blizzards, buildings burned to the ground and even a mysterious cabin cruiser floating in an infield lake contribute to its colorful history. Visitors, including dignitaries like Richard Nixon and J. Edgar Hoover, and celebrities like Lorne Greene and Ronald McDonald, made the guest list and added to its panache.

Bowie Race Track, then known as Prince George’s Park, began its inaugural season in October of 1914. Special “race trains” ran from Baltimore, Annapolis, Washington and points north, with a 65-cent, round-trip fare from Baltimore to enjoy a day at the track. Admission to the track was $1.

At the time Bowie opened, three other tracks were already established in Maryland – Pimlico (1870), Laurel Park (1911) and Havre de Grace (1912). Those tracks held meets in the warmer months, allowing Bowie to have meets in cooler times of the year. To accommodate this, Bowie’s grandstands were constructed facing west to take advantage of the afternoon sun. The grandstand was enclosed in 1957, allowing for actual winter racing. In 1958, a blizzard caused a reported 3,000 racing fans to be stranded at the track overnight. The event earned a slogan for the track…”When it snows, Bowie goes.” The following year, the track manager secured the services of some penguins to lead fans in on opening day. 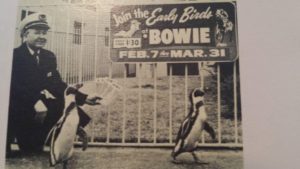 In 1927, Bowie was the first track in the country to install a public address system. In 1955, the Daily Double in Maryland premiered. In 1972, the track hosted the Noah’s Ark Race, featuring a camel, a buffalo, a llama and a “zebu” (a single-humped cow from Asia.)  The zebu took the laurels in the Winner’s Circle. On March 9, 1955, officials discovered a cabin cruiser floating on the track’s infield lake. No one knew how it got there.

Before the completion of the covered horse bridge over Race Track Road, traffic was routinely snarled before races as handlers walked the horses across the busy highway from the stables to the track. The bridge is still visible from the highway today.

The track’s colorful history was not without tragedy. The track buildings burned to the ground in 1927. Racing was suspended during the World War II years from 1943 to 1945. In 1953, a jet fighter exploded overhead and crashed in nearby woods. In 1961, the Race Train from Philadelphia crashed near Bowie, killing six and injuring 200; many survivors actually made their way from the crash site to the track, hurrying to get their double bets in. Another fire, this one in 1966, killed 60 horses; others were turned loose into what remained of a 16” snowfall on the previous day, wandering into the new residential community of Belair at Bowie. [See Baltimore Sun photos of the train wreck and fire here.]

In its final years, the grandstand seated 7,500 and the stables housed almost 1,200 horses. But by 1985, with the consolidation of racing at Maryland tracks and increased competition from new racing operations, Bowie’s long racing life came to a close.

The track now serves as a private training center for Thoroughbred racehorses and is not accessible to the public.

(Some information for this article was submitted by Belair Stable Museum; other sources include Colin’s Ghost, Race Tracks of Yesterday and Today, and Wikipedia.)