From 1954 to 1984, noted horsewoman Margit Sigray Bessenyey was the last private owner of Mount Aventine, a restored antebellum manor house built in the 1800s on the Maryland shore of the Potomac River. A Hungarian Countess by birth, Margit and her family fled Hungary after World War II. When the famous Hungarian Lipizzaner horses, rescued from the Nazis by General George Patton, arrived in Montana, she acquired stock for breeding, and used the Chapman’s Landing property as a stud farm.

She is credited with re-establishing the Hungarian Horse Registry. Together with Judith Gyurky, who had also fled Hungary and had her horses brought to America, she bred Hungarian horses, taking care that the breeding records were carefully and strictly continued without a break, laying groundwork for what is today the Hungarian Horse Association here in the United States. 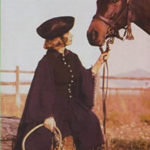 The Countess raised, trained and sold horses at Mount Aventine and was involved in local horse activities, including local hunt clubs. She had the best and only truly authentic Hungarian driving turnout, complete with the complex harness, carriage and clothing for the two footmen. She built a large indoor riding/dressage arena and numerous outbuildings, and had many horse trails created throughout the property.

Before the arrival of the Countess, the Chapman family owned the Mount Aventine tract from 1751 until 1916, and the ferry operated by the Chapmans was one of several important crossings of the Potomac River connecting Northern Virginia to Maryland. The area surrounding the manor, Chapman’s Landing, was named in their honor.

While there are no usable riding trails today, there are over four miles of walking trails on the 2,200-acre site. With its antebellum manor house, unparalleled river views, walking trails and a remarkable range of plant and animal habitats, the park is guaranteed to be of interest to history buffs, environmentalists, birders, photographers and hikers alike. The manor house is open Sunday afternoons for tours and monthly programs, or by special arrangement. The park is open daily dawn to dusk for walk-in visitors.

Photos courtesy of Friends of Chapman’s Landing unless otherwise noted.