One of the oldest tracks in Maryland, Laurel Park first appeared on the racing scene on October 2, 1911, and in the years since has brought innovation and elegance to the sport of Thoroughbred racing.

New York City grocery entrepreneur James Butler purchased the track in 1914, installing renowned promotions king Col. Matt Winn of Kentucky Derby fame as the track’s general manager. In 1918, the field was used by Army engineers as a training camp before deployment to France in World War I.  Laurel Park’s name was changed to “Laurel Race Course” for several decades until returning to the “Laurel Park” designation in 19 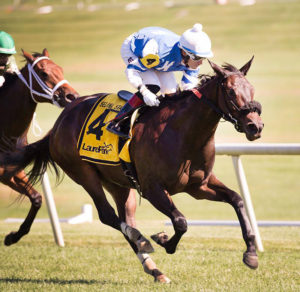 From 1950 to 1984, Laurel Park underwent a period of great change and massive renovations. Laurel was sold to John D. Schapiro in 1950. He introduced the Washington, D.C. International, a race designed to bring together the world’s best at a mile-and-a-half on the grass. The race went on to become an important fixture on United States and foreign racing calendars before being placed on hiatus in 1995. Laurel remodeled its clubhouse and grandstand to accommodate winter racing in 1966, enclosing the track’s seating area with 30,000 square feet of half-inch thick glass. When Laurel was awarded the summer racing dates in 1982, the track installed air conditioning in the grandstand and clubhouse.

In 1984, the 34-year Schapiro era ended with the sale of the track to Frank J. De Francis and Robert and John “Tommy” Manfuso. 1986 saw the first running of the Maryland Million, an American Thoroughbred horse race held annually in October to promote the Maryland Thoroughbred industry, the first “state-bred” showcase event ever created. To be eligible for the Maryland Million, which continues today, a horse must be sired by a stallion who stands in Maryland.

In 1985, facilities were upgraded to include the Sports Palace, a glittering $2 million destination featuring state-of-the-art technology, computerized handicapping and a video racing library. It was the first of its kind in the horse racing world and has since been copied by tracks across the country. Inter-track wagering made its debut at Laurel in early 1988, with the Sports Palace playing a major role in attracting fans to the satellite-beamed races.

In the recent renovations, the backstretch and racing surfaces at Laurel Park were improved. The new main course, which has been raised and widened from 75 to 95 feet, now features one-turn mile races. The track’s composition of 89 percent sand and 11 percent silt and clay is identical to the old Laurel dirt surface. The turf accommodates six track configurations which were named All Along, Bowl Game, Kelso, Dahlia, Exceller and Fort Marcy, in honor of some of the great horses which have competed on the grass at Laurel Park.

Today, with its elegant terrace dining, comfortable bars, simulcast rooms and plenty of seating in the general admission area, Laurel Park is one of Maryland’s premier destinations for horse racing and horse racing results. Info on races, wagering and more is available on the Laurel Park website.

Modern race photos by Jim McCue, courtesy of Laurel Park and the Maryland Jockey Club unless otherwise noted. Images of vintage ephemera (ads, programs) courtesy of Joseph Markon, www.horseracing-tracks.com. All others as noted.