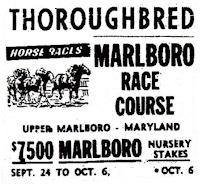 The roots of American horse racing can be traced to Colonial Prince George’s County, a county named for an expert horseman (Prince George of Denmark). As early as 1745, Thoroughbred racing meets were held in the spring and fall at Marlboro Race Course. In 1895, the ground where the existing racetrack is located was purchased by the Southern Maryland Agricultural Association, which conducted Thoroughbred racing and perpetuated the “Sport of Kings” until September, 1972.

In the early 1970s, the track figured prominently in the political corruption trial of former Maryland governor Marvin Mandel. And in 1980, a spectacular, three-alarm fire swept through the grandstand, destroying the 50-year-old landmark in what appeared to be arson.

In August of 1980, the county purchased the 150-acre complex and converted the former track into the Prince George’s Equestrian Center, a multi-use center for Thoroughbred training, equine activities and events that served the Mid-Atlantic region.

The outdoor facilities include 250 horse stalls for clients, two 150-ft. by 300-ft. competition rings with all-weather footing and adjacent schooling area, and one 150-ft. by 200-ft. covered arena with adjacent schooling area. Also located on the premises are heated/air conditioned horse show secretaries office, permanent stabling for 250 horses, a vendor area, food concession building and an area for exhibitor campsites with electricity.

Now under the operation of the Maryland-National Capital Park and Planning Commission, Department of Parks and Recreation, Prince George’s County, the center no longer serves as a thoroughbred training facility but remains a major hub of equine activities for the entire Mid-Atlantic region.