An Early Stop on the Stage Coach Route

The small village town of Chaptico, established in 1683, was one of four ports of entry in St. Mary’s County prior to the English invasion of 1813. The town, which boasted three stables and a blacksmith, eventually become home to one of the first post offices in the county, which put the town on the stage coach route that ran from Leonardtown through Charles County to Surrattsville, ending in Washinton, D.C. 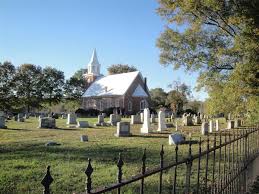 Christ Episcopal Church, built here in 1736, served notable citizens of the county, including the family of Francis Scott Key, who wrote The Star Spangled Banner. During the War of 1812, British forces ravaged the town as they marched toward Washington. They stabled their horses inside the church, which suffered extensive damage to the tile floor and interior. They also desecrated the church’s cemetery looking for plunder.

Today, the church is still an active parish, part of the Episcopal Diocese of Washington and is on the National Register of Historic Places. It is open during daylight hours. Find more info on the church’s website.